Robed Buddha, His Hand In The Bhoomisparsha Mudra 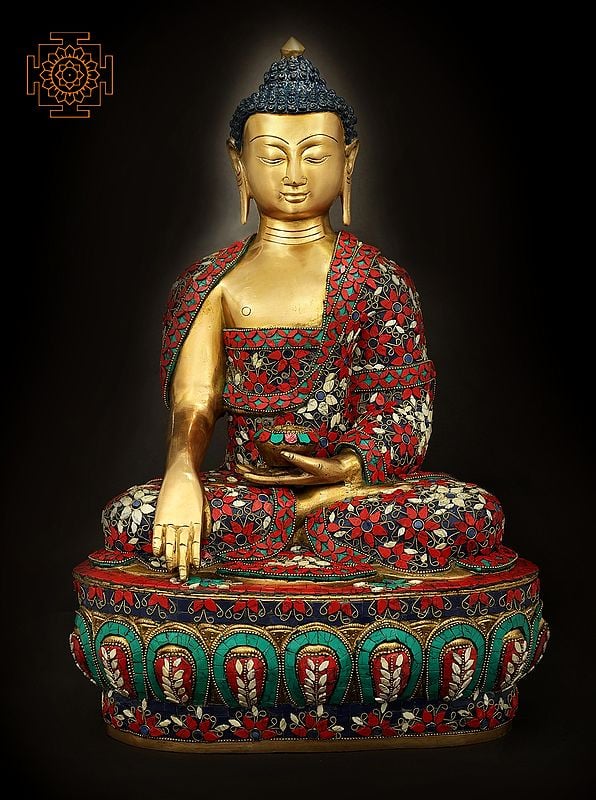 Buddhism initially had great importance only among the people of Tibet but later grew its popularity all across the globe. It was started by Gautam Buddha, the first Buddha to attain enlightenment. The people of Tibet worship him as a superhuman and not a god; his teachings are a great source of positivity and peace among his worshippers. Buddha mudras and postures are some of the important events that occurred while Buddha was on his path to attain enlightenment. One such is carved here with Buddha in Bhumisparsha mudra, touching the Mother Earth with his right hand to call her (earth) to be a witness to his achievement of enlightenment and left holds a pot, decorated here in beautiful red and green stones, as a gesture of being Gautam Buddha to be the head of the order.

This brass Buddha statue is carved here in his run-of-the-mill iconography of half-closed eyes, elongated earlobes of his princely Shakya clan, pointed nose, three lines on neck representing his melodious and divine voice and the small curls of his hair representing his years of dedicated meditation, topped with ushnisha (crown of his hair). The way of these carves, the face and body curves, life-like expressions are a major aspect that beautify this Buddha sculpture from others.

Lord Buddha sits in meditation pose on a lotus carved pedestal, supremely decorated with red, green, blue and white reconstituted stones forming patterns of flowers, vines and leaves all over. He is robed in a royal inlayed garment having a blue stone base decorated with red and white flower stones. The border complements with the field by having similar red inlayed flowers on a green stone base. This Buddha brass sculpture will be an eye-catchy artefact wherever placed and its bright and beautiful colors will spread an aura of happiness and divinity.