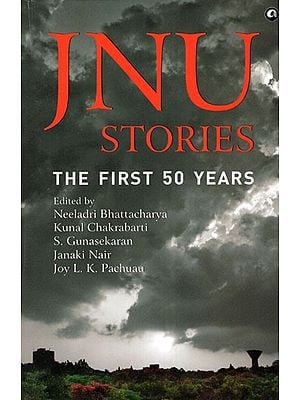 $40.00FREE Delivery
Ships in 1-3 days
Notify me when this item is available
About the Book

JAWAHARLAL NEHRU UNIVERSITY, one of India's premier educational institutions, has fostered high academic values and norms, pioneered forms of inclusion which have made for an exceptional student body, and created spaces for critical thinking, while also deepening respect for democratic traditions. This has made it among the most desirable of public universities for the exceptional standards of higher education it upholds. In its fiftieth year, JNU continues to stand tall despite coming under siege for precisely the kinds of academic achievements, democratic traditions, and inclusive policies for which it was well known.

JNU was established in 1969 under the leadership of G. Parthasarathi and Moonis Raza. It soon became an innovative intervention in the field of higher education in its encouraging interdisciplinarity, in pioneering exemplary pedagogical methods that have inspired programmes of higher education elsewhere, and in remaining steadfastly committed to ideals of equality and social justice. The faculty and alumni of JNU today include highly respected academics and researchers, some of whom have been recipients of the Nobel, the Bhatnagar, and the Infosys awards.

The contributors to this book-who include some of the university's most prominent alumni as well as those who have been an integral part of the institution-chart the history of JNU from its beginnings in the 1970s and 1980s, through the times when it expanded and grew, developed unique centres and schools, and responded creatively to the demands and needs of the complex student body. The essays in the volume recall the university's ethos and outline those unique and worthwhile features of the institution which have given the university its identity. The essays are commemorative of JNU's achievements but also serve as an important archive for preserving its institutional memory. The book is divided into twelve sections-'Spaces and Places', 'Imagining the University', 'Of Schools and Centres', 'Sites of Learning', 'Living and Loving', 'Politics, Posters, Performances', 'Giving Meaning to Social Diversity', 'Politics of Gender', 'The Way Things Were', 'Promises to Fulfil', 'Memories from Afar', and 'The Spirit of JNU'. Each section consists of diverse contributions from former students and teachers, and from administrators and staff. A rich picture is thus built, through personalized narratives and reflections, on the institution's singularity as well as what it shares with other public universities to make it the premier public university in India today.

Beautifully designed, with over a hundred photographs, JNU Stories: The First 50 Years, is the first wide-ranging and critical look at a remarkable experiment in public higher education.

Neetadri Bhattacharya joined the Centre for Historical Studies, JNU, as an MA student in 1973, and retired as professor of modern history in 2017. His recent publications include The Great Agrarian Conquest: The Colonial Reshaping of a Rural World and Landscape, Culture and Belonging: Writing the History of Northeast India, co-edited with Joy L. K. Pachuau.

Kunal Chakrabarti joined the Centre for Historical Studies, JNU, as an MA student in 1974, and retired as professor of ancient history in 2019. His areas of interest are the social history of religion, regional histories, and early textual traditions. His books include Religious Process, Historical Dictionary of the Bengalis, co-authored with Shubhra Chakrabarti, and, most recently, State, Power and Legitimacy: The Gupta Kingdom, co-edited with Kanad Sinha.

S. Gunasekaran teaches history at the Centre for Historical Studies, JNU. He writes, translates, and publishes in Tamil and English.

Janaki Nair was professor of history at the Centre for Historical Studies, JNU. Her books include Women and Law in Colonial India, Miners and Millhands: Work Culture and Politics in Princely Mysore, The Promise of the Metropolis: Bangalore's Twentieth Century, and Mysore Modern: Rethinking the Region under Princely Rule. She completed her MA at CHS, JNU, between 1981 and 1983.

Joy L. K. Pachuau is professor of history at the Centre for Historical Studies, JNU. Her publications include Being Mizo: Identity and Belonging in Northeast India and The Camera as Witness: A Social History of Mizoram, Northeast India, co-authored with Willem van Schendel.

A RED-BRICK UNIVERSITY WITH A DIFFERENCE

It is only rarely that an Indian public institution makes a commitment to the preservation of institutional memory. JNU-surprisingly given its reputation-appears to have been no exception. To look back, therefore, on fifty years of an institution's existence minus the vital prop of an official archive calls for a different kind of reconstructive effort, especially when the structures and processes that have been carefully nurtured and built up through a process of debate and discussion, trial and revision, are severely strained today. Yet, now more than ever, when even the past is no longer safe from the determined effort to refashion memory-thereby threatening institutions themselves such reconstruction is not an option but an imperative, an archival effort in itself, a debt owed to all those whose lives were touched and transformed by the life of this institution. More importantly, the way institutions like JNU think and function is crucial to the history of higher education in India and the sociology of knowledge more generally. A crisis can thus be turned into an opportunity and this book is a small step towards creating that opportunity.

Institutions develop within and against moulds. The biography of such an institution cannot afford to be a mere laundry list of achievements; rather, it must equally record and confront the failures, the struggles, sometimes unsuccessful, in breaking out of preconceived moulds as well as in creating alternatives. What are the 'thought worlds'' here not to be confused with 'schools of thought' that have been enabled in a space like JNU? Did it live up to the dreams and aspirations of those responsible for its early existence? What was the distinctive culture of teaching and learning built up at JNU and to what pressures, changes, and developments did this culture respond and adapt? Were there also unanticipated consequences of this culture of learning and teaching? Most important, to what extent can the more positive of these be replicated in other locations? 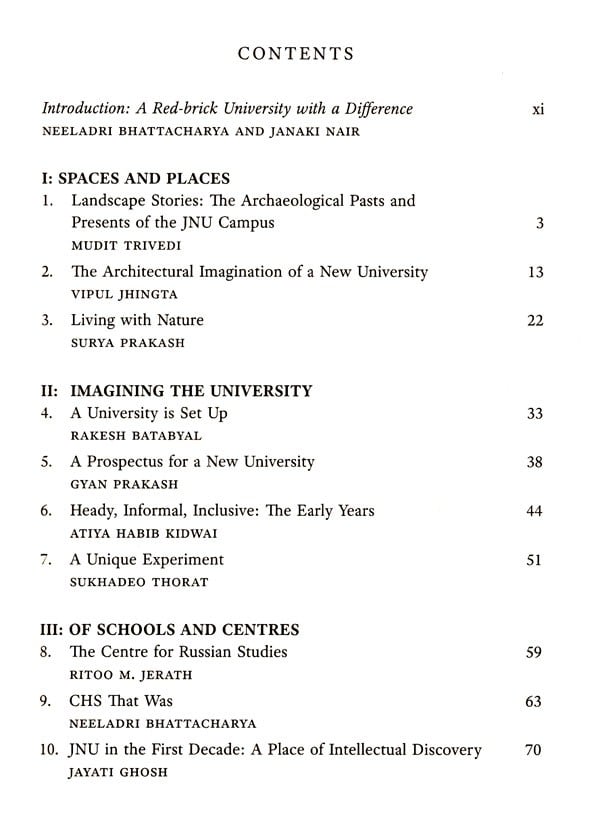 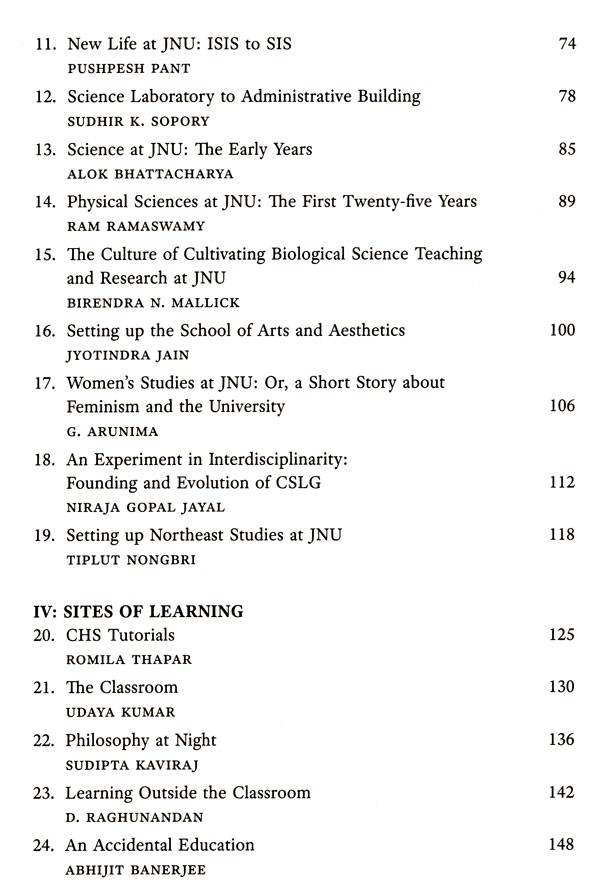 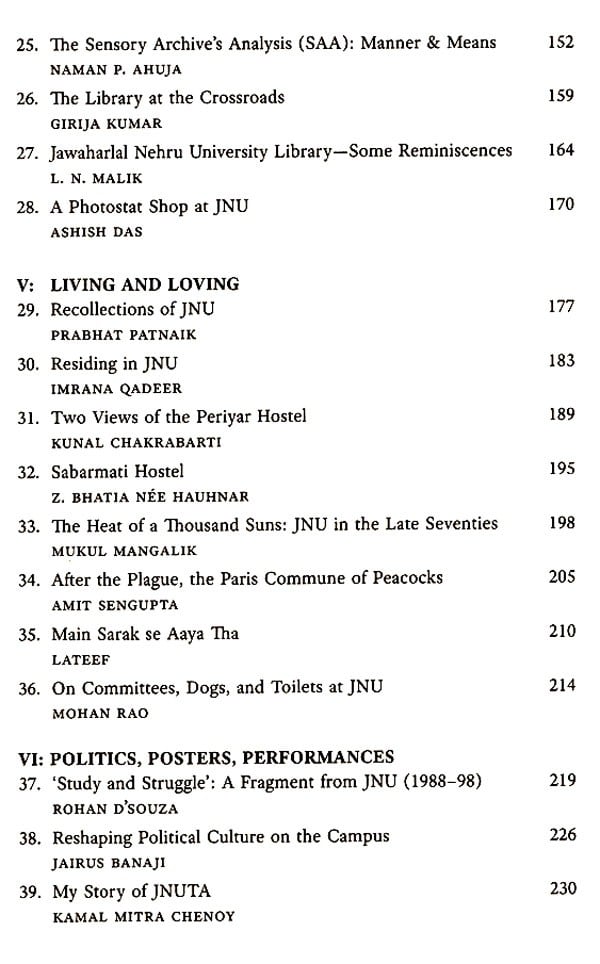 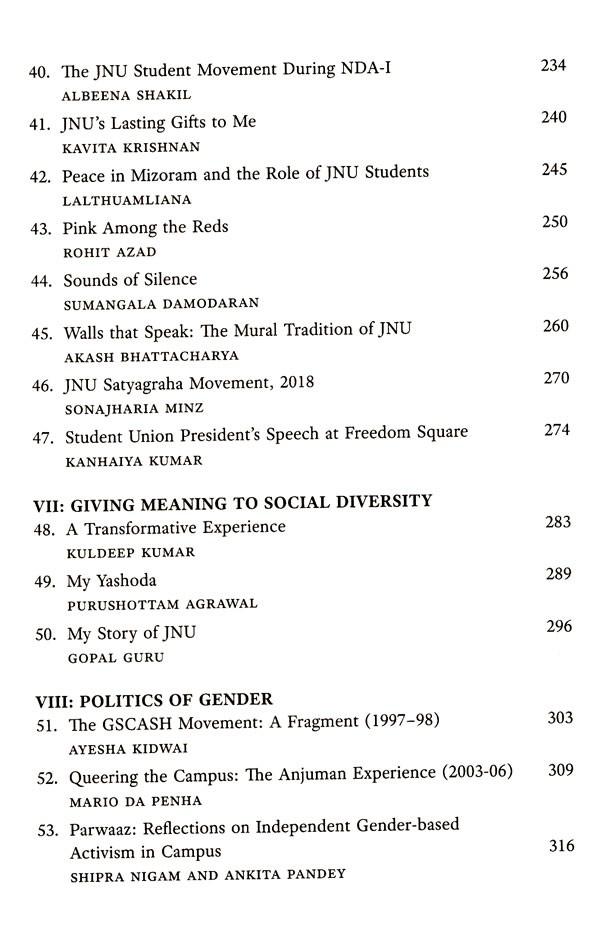 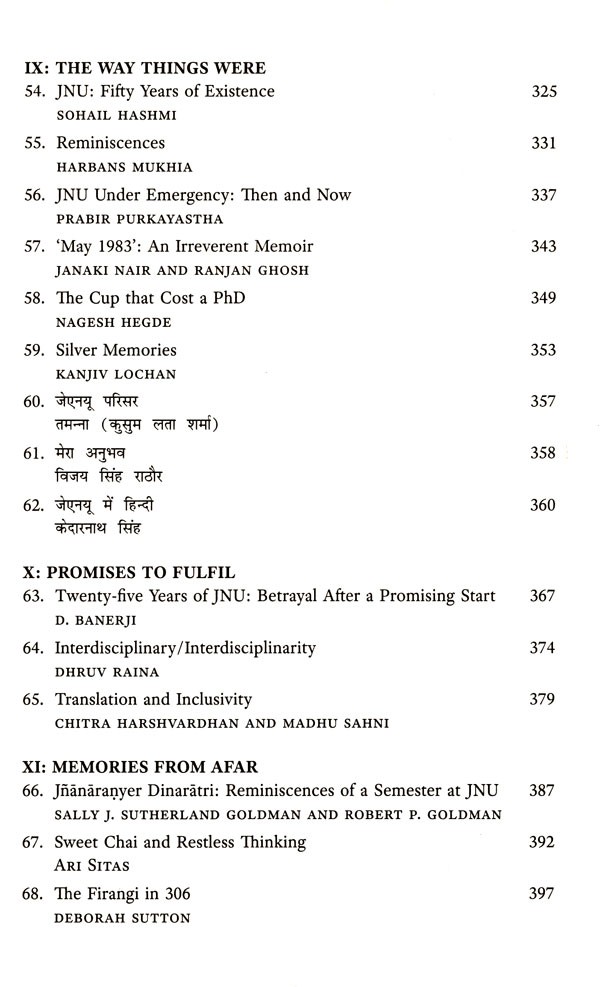 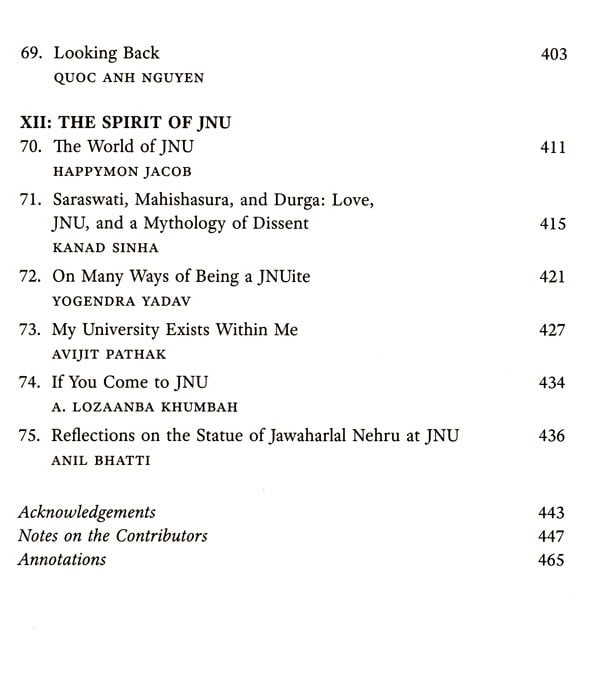 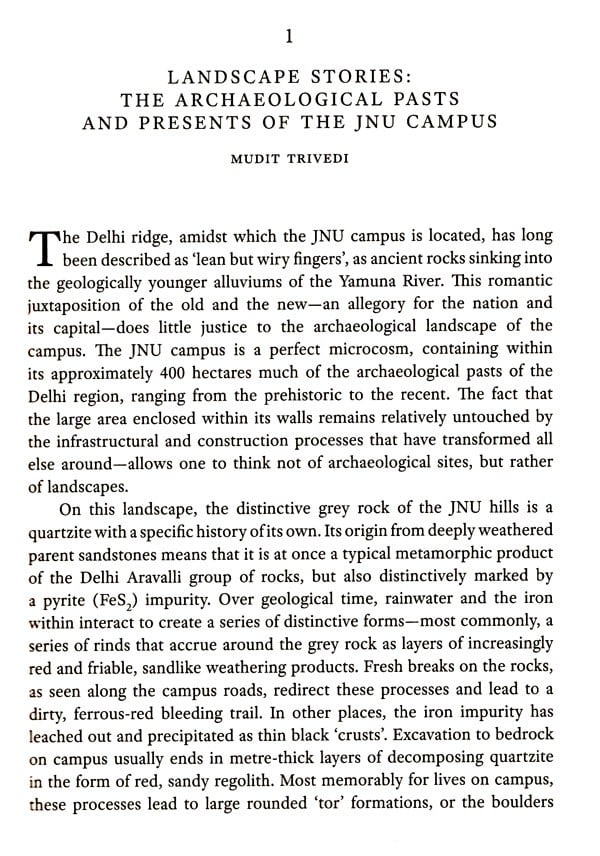 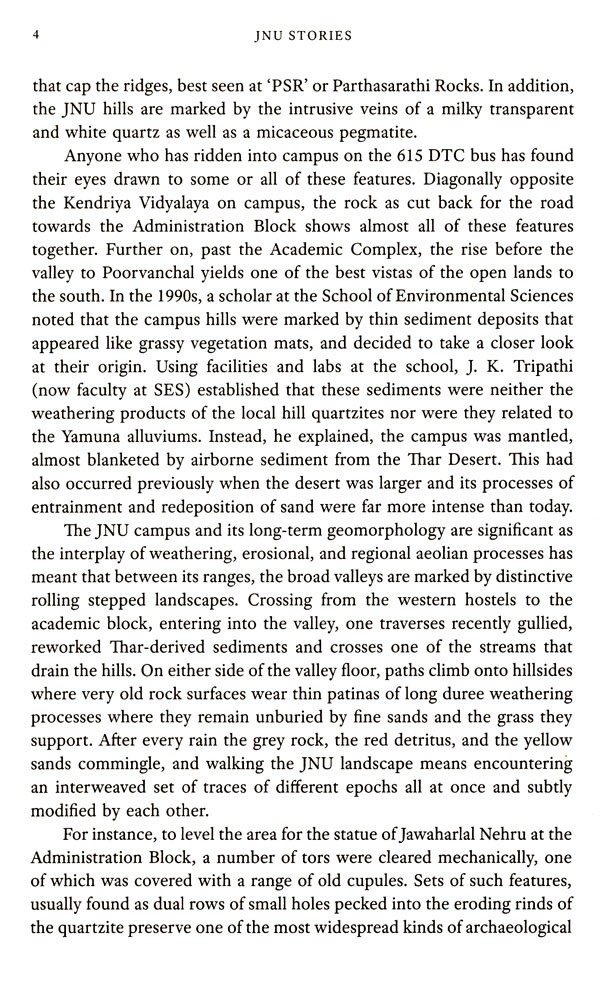 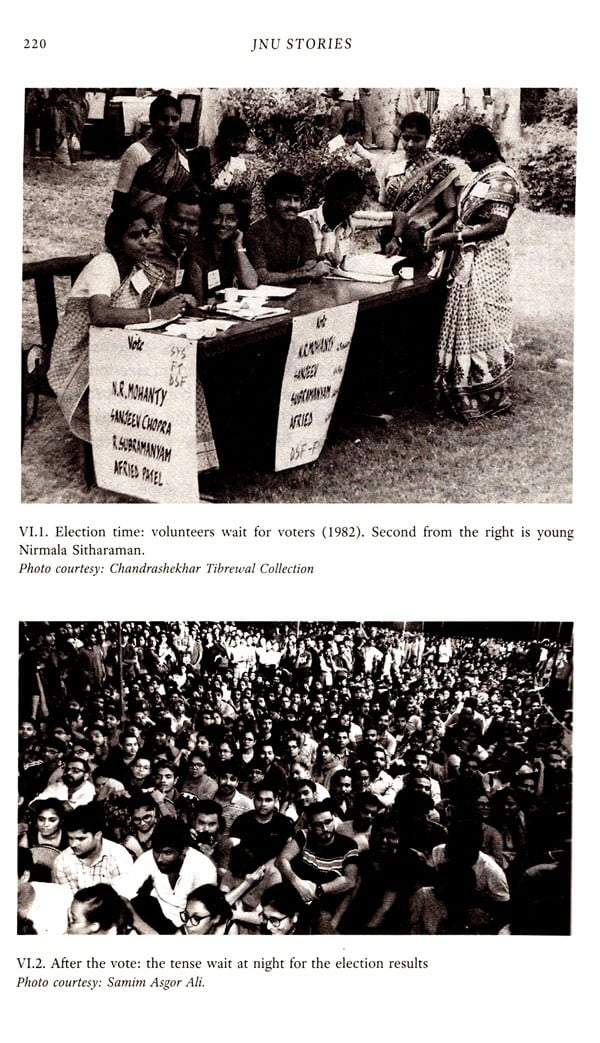 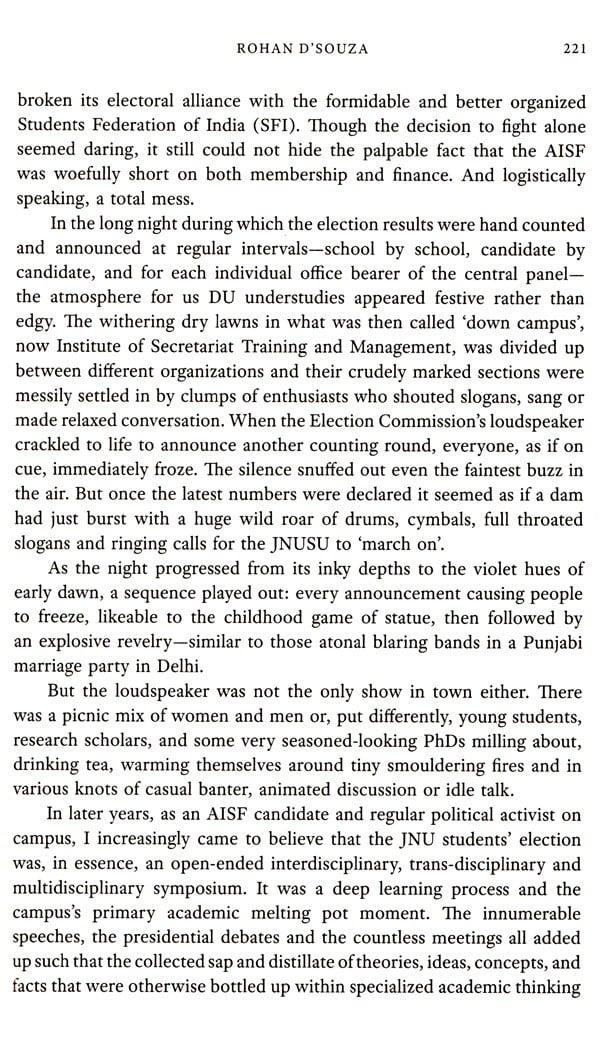